We are pleased to announce the release of Ruby 3.2.0. Ruby 3.2 adds many features and performance improvements.

This is an initial port of WASI based WebAssembly support. This enables a CRuby binary to be available on a Web browser, a Serverless Edge environment, or other kinds of WebAssembly/WASI embedders. Currently this port passes basic and bootstrap test suites not using the Thread API.

WebAssembly (Wasm) was originally introduced to run programs safely and fast in web browsers. But its objective - running programs efficiently with security on various environment - is long wanted not only for web but also by general applications.

WASI (The WebAssembly System Interface) is designed for such use cases. Though such applications need to communicate with operating systems, WebAssembly runs on a virtual machine which didn’t have a system interface. WASI standardizes it.

WebAssembly/WASI support in Ruby intends to leverage those projects. It enables Ruby developers to write applications which run on such promised platforms.

This support encourages developers to utilize CRuby in a WebAssembly environment. An example use case is TryRuby playground’s CRuby support. Now you can try original CRuby in your web browser.

Today’s WASI and WebAssembly itself is missing some features to implement Fiber, exception, and GC because it’s still evolving, and also for security reasons. So CRuby fills the gap by using Asyncify, which is a binary transformation technique to control execution in userland.

In addition, we built a VFS on top of WASI so that we can easily pack Ruby apps into a single .wasm file. This makes distribution of Ruby apps a bit easier. 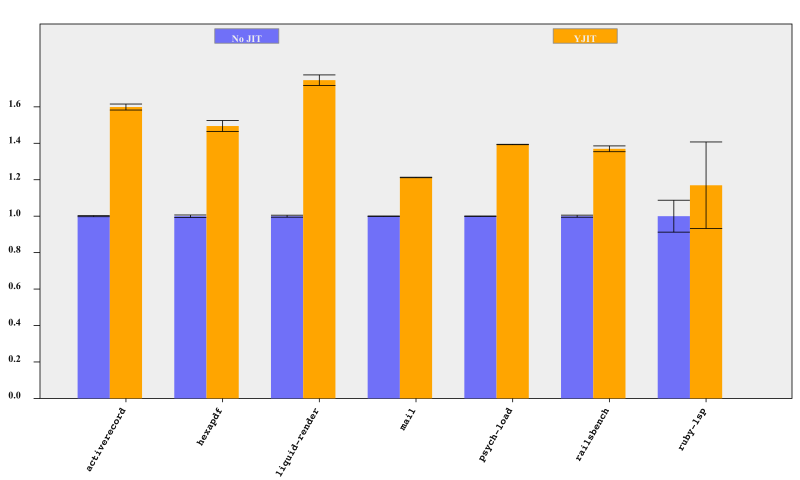 It is known that Regexp matching may take unexpectedly long. If your code attempts to match a possibly inefficient Regexp against an untrusted input, an attacker may exploit it for efficient Denial of Service (so-called Regular expression DoS, or ReDoS).

We have introduced two improvements that significantly mitigate ReDoS.

Since Ruby 3.2, Regexp’s matching algorithm has been greatly improved by using a memoization technique. 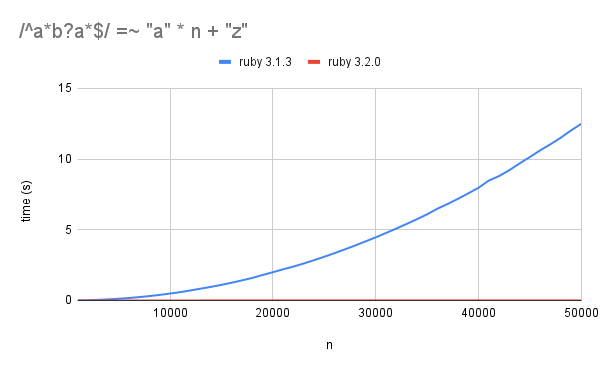 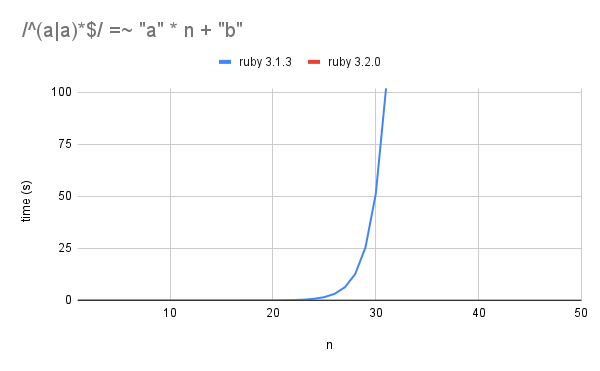 The improved matching algorithm allows most Regexp matching (about 90% in our experiments) to be completed in linear time.

This optimization may consume memory proportional to the input length for each match. We expect no practical problems to arise because this memory allocation is usually delayed, and a normal Regexp match should consume at most 10 times as much memory as the input length. If you run out of memory when matching Regexps in a real-world application, please report it.

The original proposal is https://bugs.ruby-lang.org/issues/19104

The optimization above cannot be applied to some kind of regular expressions, such as those including advanced features (e.g., back-references or look-around), or with a huge fixed number of repetitions. As a fallback measure, a timeout feature for Regexp matches is also introduced.

Note that Regexp.timeout is a global configuration. If you want to use different timeout settings for some special Regexps, you may want to use the timeout keyword for Regexp.new.

The original proposal is https://bugs.ruby-lang.org/issues/17837.

Other notable changes since 3.1

The following deprecated constants are removed.

The following deprecated methods are removed.

The following APIs are updated.

The following deprecated APIs are removed.

See GitHub releases like GitHub Releases of logger or changelog for details of the default gems or bundled gems.

Ruby was first developed by Matz (Yukihiro Matsumoto) in 1993, and is now developed as Open Source. It runs on multiple platforms and is used all over the world especially for web development.